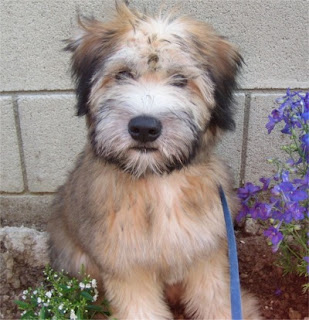 Hushbear and I have decided to adopt a wheaten terrier. Of course my first instinct is to adopt a rescue, but we’ve been thinking about how nice it would be to have a puppy. Here’s where some of the problem is. I’ve put in an application with Wheatens in Need. I’ve also been emailing different breeders in Texas. If we are to go the puppy route, I would want to get one from a reputable breeder. I know it’s more expensive, but then you know that the dog is healthy and if the parents have had any problems.

I want to be careful about who I adopt from. I’ve found puppies out of state, but how do you check to make sure they are healthy? How do you know that the breeder socializes them and isn’t just in it for a check?

Since this is probably the only time we will adopt a puppy from a breeder I want to make sure to do it right. A good breeder breeds no more than once a year. A dog can usually have two, but the strain is so hard on the female that good ones wait at least a year between litters. Most of the good breeders seem to show their dogs.

There is a breeder in Spring that sounds perfect. He’s close by, the litter won’t be born until April, it’s obvious from the videos and pictures on his site that his dogs are well cared for. He usually doesn’t place dogs based on sex, but he said if the litter is large and predominantly female he is willing to work with us. I like it that they aren’t born yet because we might be able to get one without its tail docked. I don’t judge people who dock their dog’s tails. It’s none of my business, I just like a long tail. There’s something about a big tail wagging greeting that doesn’t transfer when it’s just a stub.

I’ve received emails back from 4 other breeders in Texas, none of them have puppies or have plans for litters until the fall. Hopefully one of the others is having puppies soon, or things work out with the guy in Spring. If his breeding took, and it sounds like it probably did, we would be able to get a puppy from him in early June.

The one on the right is just like Bell

Recovering pharmacy technician, History BA, wife to a workaholic, mommy to one pup and two boys, epileptic, vegetarian. I've got a mouth like a sailor & find myself becoming more cynical & more liberal all the time.
View all posts by SP →
This entry was posted in Uncategorized and tagged Uncategorized. Bookmark the permalink.