So, I graduated in May. I’d do a post on it, but just really don’t have it in me. It was nice, and feels great to be finally finished. Mom & Jaeden came down to surprise me, which was awesome. My dad flirted with my mom at my post-graduation lunch, which was disturbing.

What have I been doing since graduation? Traveling, getting sick, & a whole bunch of nothing. The traveling part has been awesome. The being sick every vacation has not been. The nothing means I have no amusing stories from the pharmacy.

September 25-October 12 we were in Europe while JH & Ashlea watched the girls for us. Misha had to go to Amsterdam & London for business & I decided to tag along. Our first stop was Paris. I am now in love with Paris. The first time I liked it somewhat, but the second time I decided that I love it there. As in I want to have babies with it.

We decided just to relax & let things happen in Paris. We had a list of things we wanted to do, but didn’t plan out our days too much. I wanted to go back to Versailles because we missed so much the first time, but we slept in too late the day we planned on going. We really wanted to go to le potager du roi (vegetable garden created during the reign of Louis XIV) but we were still sleeping when it closed for the week. I think we will try to go next time we are in Paris. In addition to the vegetables, you can buy jams made from fruit grown in the garden. What an awesome gift that would have been for a certain UH professor/French historian!

We rented a loft & will do that next time too. It was nice having our own space with a kitchenette, washer/dryer, etc. In 2008 we rented an apartment in Saint Germain but this trip we stayed in Montorgueil. I would love to stay in le Marais next time (I could get the best falafel I’ve ever had almost any time I wanted it!) We had a lot of fun just walking through different areas & going to the markets. Misha, of course, loved the meals the most!

View of Notre Dame at night across the Seine

As you can imagine, I totally geeked out at the historical sites and went crazy on our last day when we got to go to the opening of the French Revolution exhibit at the Carnavalet Museum, (the museum of Paris history). We couldn’t read most of the information, but I think I impressed Misha with my knowledge & explanations. (Perhaps he doesn’t think my degree is such a waste now!) I was quite disappointed that they glossed over The Terror, but it is understandable. Interesting to study, but not a very proud event in French history.

After Paris, our next stop was Copenhagen. Copenhagen is another really pretty city. Living in Houston (where almost nothing is preserved) it is amazing going to these cities where the architecture is stunning & there is so much history. I’d like to go back because we were only there for a few days, and it was so damn cold while we were there. We like to walk around cities & I needed a much heavier coat in Copenhagen! I’m shivering just thinking about it.

Those are swans near the center of the picture.

We happened to be visiting Copenhagen while the Obamas were there for the Olympic bids & announcements. We saw a large crowd in the square across from our hotel and found out that was where they were doing the announcements. We went over there and watched for about an hour before returning to the hotel. All of the Danes were rooting for Chicago, but there were a surprising number of people there for Tokyo (many of them were dressed as Pikachu). 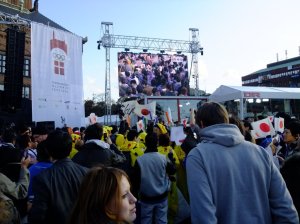 The square where Olympic announcements were made. Note the Japanese delegation dressed as Pikachu.

The people there we so nice. I swear, the Danes are the happiest people on earth. They are just all so friendly. The only people who weren’t were the woman at the front desk at our hotel (I think she was German though) and an Australian waiter at a restaurant. With the Obamas in town we came across one slightly disgruntled cab driver. He was upset that the roads had been shut down earlier in the day and complained that Michelle Obama had an eight car entourage when the Queen of Denmark only requires one car when she is there. I assured him that the cars were probably for Oprah!

Our last day & 1/2 in Copenhagen weren’t very much fun. It was even colder and was pouring rain. As I was starting to feel sick, I decided to stay at the hotel our last full day there trying to rest. If we ever go to Sweden, (I really want to see Stockholm) I’d like to go back to Copenhagen for a few days to see more of the city. Misha would like to go back just to eat at NOMA again. 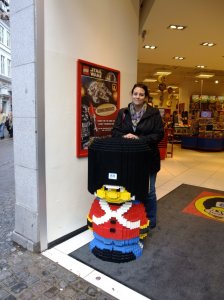 We went to Amsterdam next & Misha had to start working. I was starting to feel worse & only went out a few times while Misha was working. The last day there I didn’t want to stay in the hotel anymore and wanted to see more of the city. We were staying in a much nicer area than our trip in 2008 and I walked around there and went down to look at some of the stalls at the flower markets. Having been to Amsterdam twice now, I really don’t have any desire to go back. Parts of it are pretty, but I think there are many other places I would like to go to.

The highlights of the trip to Amsterdam were getting chocolates at Puccini Bomboni, getting chips at Chipsy King (see husband’s blog post from 2008 for more on that), & eating at the Pancake Bakery. We brought some chocolates back for JH & Ashlea as well as our friend Alison (she really liked them). Once Misha finished his own chocolates, it took considerable effort on my part to convince him not to eat the ones we brought home as gifts.

The last stop on our extended vacation/work trip was London. I love London. I adore London. It’s really too bad that I was so sick I didn’t want to eat or get out of bed. We stayed at the Hotel Indigo at Paddington station and it was lovely. After a problem with the thermostat in our room, we moved to a slightly larger room & then their biggest room for our last 3 days.

I forced myself to go to the British Museum our first day because I really wanted to see the Rosetta Stone. I saw most of the museum, but did it very quickly. I wanted to get the hell out of there because it was apparently kids day. There were school children in their uniforms running around everywhere. The last thing I wanted to deal with while I was sick were screaming children. When we went to London with Dan & Tara in 2007, we were amazed at how well-behaved the British children were. Yeah, not these kids. I’m not sure if it was the lack of supervision (the teachers were mostly ignoring them) or what, but they were wild!

Over the rest of the week I made myself to walk around the area we stayed in, but didn’t do much else during the day. I went out to dinner with Misha at night, but missed out on so much of the city. I hope that I’ll be able to tag along another time when Misha has to go back. Once we got home it took me over a week before I felt better. Major suck. 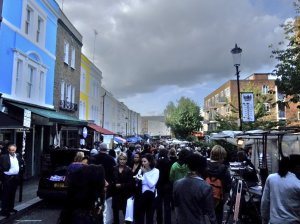 While I was bedridden in London, I read the entire Southern Vampire Mysteries series (aka Sookie Stackhouse novels) on my Kindle and quickly decided that I’m totally Team Eric. I watched season 1 of True Blood on the plane back to Houston and got season 2 once we got home. Much of True Blood annoys me (like setting up Bill as the hero & Eric the villain, oh and don’t even get me started on the extended maenad storyline) but the eye candy of the series makes it quite nice.

I’ll work on Part II, our Japan trip, soon. Well, hopefully I will. I’m waiting for Misha to put the pictures up still. (Spoiler: I got sick in Japan too.)

Recovering pharmacy technician, History BA, wife to a workaholic, mommy to one pup and two boys, epileptic, vegetarian. I've got a mouth like a sailor & find myself becoming more cynical & more liberal all the time.
View all posts by SP →
This entry was posted in Uncategorized, vay cay. Bookmark the permalink.

1 Response to Vacation Part I